Xingyiquan are all based on Yin-yang principles. They share sophisticated, circling body mechanics and energetics (Qi gong) which build up internal and external strength in the practitioner, leading to extremely effective martial skills. Our mind-body self-defence course draws on the strong points of all three of the internal styles and includes defence against both bare hand and weapons attacks.

Baguazhang (also spelled Pa Kua Chang) is one of the most graceful and effective of the Chinese martial arts. With its fast circular walking and continuous, coiling, turning, twisting movements, Bauazhang has been likened to a spinning energy ball, a fan or a tornado...also to the waist of a dragon, ever turning and twisting.  Baguazhang practitioners can attack or defend while rapidly walking or turning.

Benefits include suprisingly effective self-defence capabilities, aerobic training, improved breathing and coordination, increased flexibility and whole body speed and internal energy skills (Qigong). Since it is based on the same principles as Traditional Chinese Medicine (TCM), its training can be as beneficial for internal health as for martial prowess. 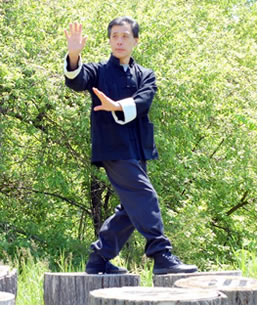 Xingyiquan (also spelled Hsing I Chuan) is the most direct of the three "internal" Chinese martial arts, which also includes Taijiquan and Baguazhang, being likened to the head of the dragon or to a cannon ball of energy (Qi) because of its direct, counterattacking techniques. The legendary 12th century Chinese general, Yeuh Fei, used it to train his victorious troops.

This style of Xingyiquan, which can be traced back to Liu Qi-lan, is based on the Wu Xing Quan or Five Element Fists: ­ Splitting (Metal), Drilling (Water), Smashing (Wood), Pounding (Fire) and Crossing (Earth). Subsequent training includes the Five Element Linking sets, the Twelve Animal sets and 2-person sets. Related training includes Yi Quan standing meditation postures, which are a powerful Qigong tool.

The Five Element Fists are based on Five Element Theory, which is prominent in Chinese philosophy and in Traditional Chinese Medicine (TCM). The Five Element theory works not only as a martial strategy but also in terms of health. Thus as you train, you are purifying and strengthening the whole mind-body system and especially the five Yin organs ­ lungs, kidneys, liver, heart and spleen.